Why the Suburbs Are a Terrible Place to Live

I think the suburbs are a terrible place to live.

Don’t get me wrong. I grew up in the suburbs (as opposed to an urban or rural area) for 16 years. Places like Frisco are wonderfully safe, predictable, and often have good schools. For many people, a two-story house filled with a loving family represents the American dream.

But I think the suburbs squeeze the randomness out of life.

The Good, the Bad, and the Sterile 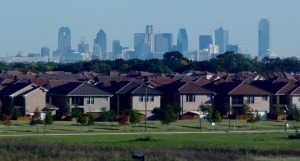 While living in Plano, an affluent town just outside Dallas, I experienced both the good and the bad of the suburbs. I’ve found that the positive aspects are highly visible, while the drawbacks are difficult to notice.

This is because the nice suburbs typically exist in a bubble. You probably don’t interact with homeless people regularly, people outside your economic status, or the dirtier parts of the state. Everything is kept very clean, very sterile. And so kids growing up think the whole world lives like they do. Very orderly, very predictable. Life is linear.

Life in the suburbs is very “point-A-to-point-B.” That is, you drive in a car between two places, hours neatly tucked into a schedule. You can’t walk the distance (which is probably several miles), and if you can, your first thought is to take the car anyway.

So you “warp” from place to place. There’s nothing wrong with “point-A-to-point-B” (and people outside the suburbs can have this behavior, too). However, you don’t often have the option of walking or using public transportation (choices that would release less CO2). More importantly, you don’t get the random encounters you might find on the sidewalk. In the city, you might run into an old friend, a new friend, or a massively positive rare event.

The great thing about living in the suburbs is that it gives you access to the excitement of the city and the tranquility of the countryside. Pretty, gated communities are wedged between golf courses, well-kept sporting fields and convenient shopping centers. Everything looks nice, but it lacks character.

Maybe the suburbs are intentionally shallow and sterile–like a two-inch pool. Despite the efforts of municipal art committees, it seems that most suburbs are not very distinguishable from one another. With quietness comes a sense of dullness, I suppose.

The American Dream, Utopia, or Whatever You Call it

I’m not saying that you need to avoid the suburbs at all costs. Like I said, there are plenty of advantages to “living the dream,” and these criticisms can also apply to people living in any type of town. Likewise, there are many people who live in the suburbs who don’t suffer from these problems.

My point is this: acknowledge both the good and the bad, wherever you live. With all the advertised benefits, don’t forget that nice suburbs exist in a bubble, are dependent on cars, and lack character. And remember that having the option of change is preferable to having no option at all.

What do you think of the suburbs?

This entry was posted in Psychology and tagged optionality, suburbs. Bookmark the permalink.